Rich in tradition and beautiful in architectual design, St. Mary's church, Hagley, is a lasting monument to it's founder, the late Sir Richard Dry, country squire, statesman, public benefactor and sportsman. He visualised its setting and donated the site. Standing well back from the main highway, on a commanding hill, the church dominates the landscape. Its towering spire easily overtopping the English trees by which it is surrounded.

"In the faith of Jesus Christ we place this stone, in the name of God theFather, God the Son, and God the Holy Ghost."

The building of the church took less than a year and on the 25th November, 1862, in the presence of the Governor, Col. T. Gore Brown, and a large congregation, Archdeacon T. H. Riebey, plus ten of his clergy, read the licence to a response to a petition signed by Sir Richard Dry and the church wardens Col. R. C. D. Home, and Messrs. S. Kirkham and M. Greenway.

Only seven years after the opening of the church, Sir Richard died at the age of 54. His remains are buried under the altar. 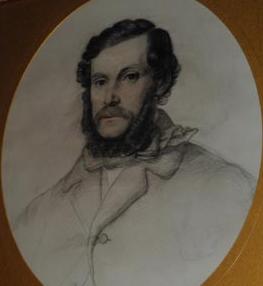 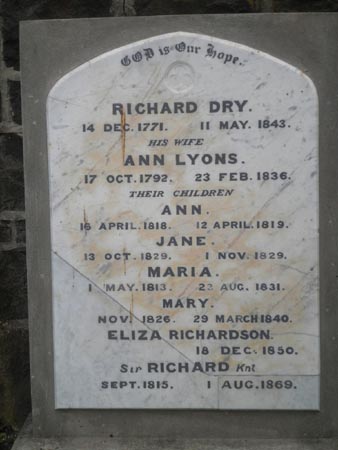 It was decided that a chancel would be added to the church as a memorial to him. Lady Dry also gifted to the church, the altar, prayer desk, an alms dish of Dutch design, the magnificent organ, which was built by Walker [London] in 1861 and the font.

Sir Richard Dry was born at " Elphin Farm" Launceston on the 7th September 1815.