Visitors to Westbury are impressed with the quiet "Old worlde" beauty of the Village Green, shaded by its towering English trees, and enclosed by its hawthorn hedges and centry-old buildings.

Foremost of these, with its Georgian tower standing like a fortress, is a church dedicated to the glory of God and St. Andrew.

Built of sandstone bricks, shaped and dried in the sun a few hundred yards from church, St. Andrew's Church of England had it's beginnings before the Girl Queen, Victoria came to the throne of England.

Those were harsh days when Westbury was a convict station, so that the softening influence of a place of worship could not be over-emphasised.

Around this church centre are many reminders of the generations of men and women who worshipped God in this place, been baptised, confirmed and married within its walls and those "whose course on earth is o'er"

In the very early days when Tasmania was called Van Diemen's Land all this part of the country was known as Norfolk Plains, principally because the first settlers there had come from Norfolk Island. Sometimes the old hands used to refer vaguely to the northern part of this large area as "the Westward", because most of it was covered with great forests that had grown for centuries in the deep rich soil and only explorers and agents for the Van Diemen's Land Co. in the far north-west ever visited the place or attempted to cross the swift, bridgeless rivers

Then a detachment of soldiers was sent to protect any daring settlers who might take up land in these wild parts, where native blacks, escaping prisoners and bushrangers could be expected at any time of the year. These soldiers, a lieutenant, sergeant, two corporals and 27 privates cleared enough land on the eastern bank of the Quamby Brook to form a parade ground on what is now the Village Green.

Governor Arthur, whose name is particularly remembered by Port Arthur, ordered a township to be laid out in 1828 with 126 miles of street and roads which was to be called Westbury. And there, facing the Village Green he laid the foundation stone of this historic old church on 7th. March 1836. Before that time services had been held under trees, in the old Post Office or in private homes and the parson would ring a hand bell, or get someone to do it for him, so every one would get ready in time.

The Government used to pay most of the cost of building a church in those days and church-going was compulsory, at least for the soldiers and all the convicts in the community.

The pews were made of pit-sawn timber, very uncomfortable and with open backs, through which the less attentive could easily fall onto the floor when attacked by sleep.

At the end of each pew a piece of hoop-iron with a socket to hold a candle gave light for evening services and it was the sexton's duty to snuff the candle when the wicks grew too long and dropped grease on the floor, for they were generally home-made candles and not the wax sort that are used in most churches at the present time.

In those days the parson often used to change his surplice for a black gown in the vestry before preaching his sermon, but times changed and a softer generation demanded an organ for the music and more comfortable seats to enable them to sit without fidgeting during the hour-long sermons. These things were added in 1877 and in 1895 the parish hall was built and used as a Sunday School.

The present chancel had been built five years earlier and took the part of the "mere recess" which had done duty before that time. The new chancel was consecrated by Bishop Montgomery, the father of General Lord Montgomery.

All the lovely carving in the church was made and given to St. Andrew's by Mrs. E. N. Payne, whose family descended from the famous pioneer William Field (he came to Westbury from New South Wales in 1816) who built Westfield, situated a mile past Westbury on the way to Devonport, in 1825. Mrs. Payne studied her art in London and Paris and is well-known all over Tasmania.

The foundation stone of St. Andrew's Church of England was set by the Lt. Governor (Col. Arthur) on March 7 1836. The building was completed 1841. In 1859 the tower was added and in 1877 the present pipe organ replaced an harmonium.

In the 1890's Bishop Montgomery, father of Field-Marshall Montgomery, consecrated the present chancel.

St Andrew's Church dates from 1836, when its foundation stone was laid by Lt. Governor Arthur. The Church was completed in 1843, except for the Tower, which was added in 1856. Inside are many handsome memorials, some of them carved by Mrs. E.N. Payne, daughter of the Hon. Thomas William Field, of Westfield. Clergyman was the Rev. John Bishton, and among his successors were the Rev. F. B. Sharland, who served for 17 years, the Rev. A. E. Hutchinson and the Rev. B. Tudor Craig. The church was designed in the office of the Inspector of Works - possibly by James Blackburn, who was then employed in the office and was responsible for so many of our most beautiful churches.

St. Andrew's was opened for worship in 1842, but not consecrated until March 6th 1851. Prior to 1842, services were held in the Police Station. Parish Registers date from 1837 and the original Baptism and Burial Registers are still being used today. The First Burial was recorded April 5th 1837; the First Baptism March 17th 1839 and the First Marriage June 28th 1839. 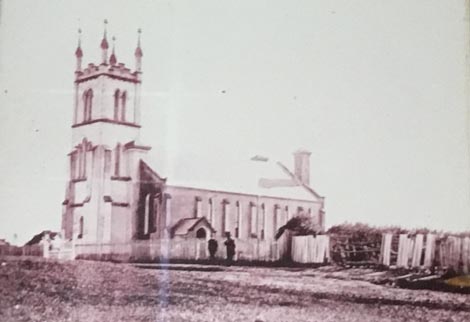 ST ANDREWS PRIOR TO AUGUST 1877

THE SPIRES ARE STILL ON THE CHURCH